Breast milk – this is how it works

Breasts change already in the early stage of the pregnancy, getting ready to nurse the baby that’s on the way.

Breasts already have some hollow cavities, the so-called alveolus, where the milk-producing cells are located, as well as the ducts. Milk is produced in the alveolus and then transported to the nipple via the ducts. The ducts grow in number and size during the pregnancy, the alveolus grows in number as well and the blood flows to the breasts increases. This is noticeable by the increased size of the breasts and by visible blood vessels on the breasts. The size of the breasts is no indication of how well they produce milk. 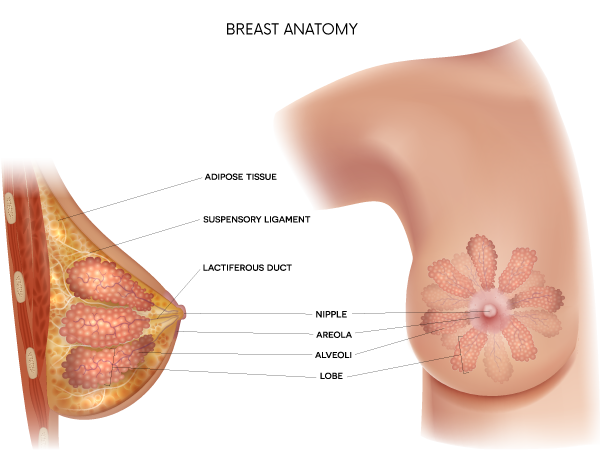 The first milk is formed in the breast already during the third month of pregnancy by the milk-producing hormone prolactin. The first milk is called raw milk or colostrum. Colostrum is what a newborn gets during the first few days of their life. Raw milk contains more proteins, minerals, and vitamins than mature milk, and more immunoglobulin, which strengthens the baby’s immune system. After a few days, the colostrum is replaced by mature milk, which has a higher fat and lactose content.

The level of the hormone oxytocin in the mother increases when the baby sucks on the breast, and sometimes even before the baby latches on and sucks. Oxytocin causes the let-down reflex to start, the milk is released from the alveolus via the milk ducts out to the nipple and the breast is emptied more efficiently. The let-down reflex may feel like tingling in the breast and it can sometimes be painful, while other women don’t have any sensation at all. Many things might lead to a delay in the let-down of breast milk, for example, if the mother is stressed, anxious, or in pain. Some tips to combat a slow or difficult milk let-down reflex are: being in a peaceful and quiet place, being warm, feeling the baby’s skin against your skin, and a gentle massage of the breasts.

Hundreds of related articles, podcasts & more waiting for you in the Preggers app.

Straight after birth, the newborn baby tends to be awake and alert for about two hours, which is when the baby breastfeeds for the first time.

Getting the baby to latch on to the breast

It is important that the baby can latch on to the breast properly as this will reduce the risk of sore nipples, uncomfortable breastfeeding, engorgement, insufficient amounts of milk and slow weight gain in the baby.

The first days of breastfeeding

The breastfeeding pattern differs from child to child. Some babies sleep almost the entire first day after birth, while others want to feed straight away and often. Although your priority is not on yourself, make sure to sleep when the opportunity presents itself, eat well, and ensure that you get enough fluids.

Bleeding and discharge after giving birth

After giving birth, it’s normal for the mother to bleed, for up to eight weeks. Most of the bleeding is from where the placenta comes away from the wall of the uterus. This happens to all women, whether the birth was vaginal or by cesarean section.

The uterus will shrink back down to its normal size after delivery. The contractions are called postpartum pains, or simply afterpains, and are similar to period pain.

I am in a constant stage of development now.